From Pixelbar Wiki
Jump to navigation Jump to search

At first, i did some research on how to capture Infrared signals into RS-232. I have found multiple website about this.

I build my device's from this scheme : Howto Build an IR Reciever ( and yes, i thought, if a girl could make it... sure as hell i could! )

I started with ordering the nescesarry stuff, My packing list which i ordered with Conrad.nl was made up of the following

I had assembled the first reciever, when i found out, that the TSOP1838 had a different pinout from the TSOP1738 which was used in the earlier called howto. Once again i made a new reciever. This time i had a working one. Pictures are below.

Preview Picture of the remote i want to use.. 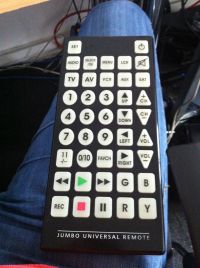 After i made the hardware, it was time for the software interface. This was a hole different part of the job. I used Lirc in combination with XBMC